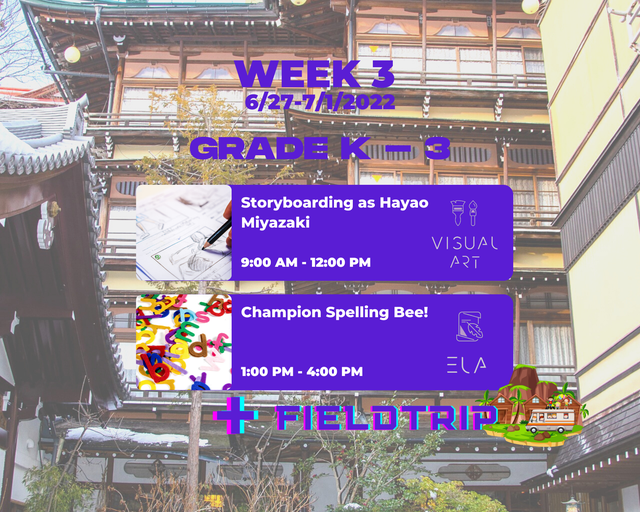 GK-G3- AM: Storyboarding as Hayao Miyazaki

Do you know all of the Ghibli Studio movie frames are almost hand-drawn before being put together to create movement? In this course, we will reveal the magic of Hayao Miyazaki’s world and also learn the techniques of storyboarding. Storyboarding is a powerful tool to communicate your story/idea efficiently, also a blueprint for production.

What is Storyboarding: storyboarding is a graphic organizer that consists of illustrations or images displayed in sequence for the purpose of pre-visualizing a motion picture, animation, motion graphic, or interactive media sequence.

With Phonics, a teaching method for reading and writing, a child can decode a word by its sound. To build a strong Phonics skill and keep the learning engaging, this class will be extremely hands-on and interactive. Our Spelling Bee contestants will train for the Champion Spelling Bee at the end of the week! Who will be the winner?

*Once a week field trip is included.